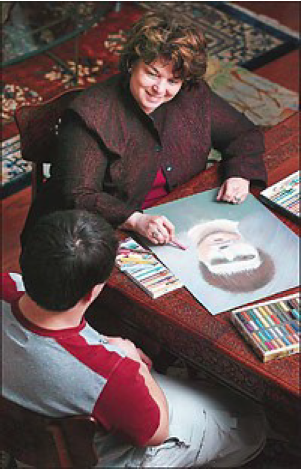 Florance sketches a portrait of her son Whitney, the subject of her book.

The heart of a mother coupled with the mind of a scientist made a miracle. Speech-language pathologist Cheri L. Florance waged a years-long war against self-doubt, exhaustion and school administrators to conquer her toughest case: that of her severely mentally retarded son, John Whitney Conway. ‘‘There were many nights when I fell asleep crying and woke up crying,” said Florance, 55, during an interview from her Worthington home. ‘‘I was worried, scared and not sure what the next step would be.”

Her commitment to helping her son overcome his profound problems eventually led to ground-breaking research that could help countless others.

With co-writer Marin Gazzaniga, Florance recounts her ordeal — and Whitney’s triumph — in Maverick Mind: A Mother’s Story of Solving the Mystery of Her Unreachable, Unteachable Silent Son. The book takes readers on a journey through central Ohio schools, where she steadfastly refused to have Whitney assigned to special-education classes.

The schools ‘‘evaluated him as a very low-functioning child and in a way he was,” Florance said. ‘‘But I wouldn’t accept their recommendations at face value.

‘‘I was trying to convince them that he was a bright, visual person and should be treated that way. They thought his situation was desperate.” 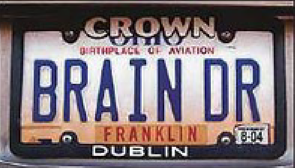 Cheri Florance’s license plate reflects her research at Ohio State University, based on her experience raising her mentally retarded son

A friend pleaded with Florance to give up on ‘‘the wild child” for the sake of his older sister and brother.

Florance feared that her dream of a normal life for her son was nothing more than the fantasy of a mother in denial.

The reward for her persistence and probing is a young man finishing his senior year at Bishop Watterson High School and shopping for colleges.

‘‘If she had not been his mother, he would have never come out of this,” said Tammi Pistone, a former research assistant for Florance who helped care for Whitney and his siblings. ‘‘He would have ended up in special education, an institution or even jail.”

The turnaround is startling, even to Whitney, who barely recognizes himself in his early, most difficult years.

‘‘How did I become so nice and genuine?” Whitney said. ‘‘How did my mom put up with me?” 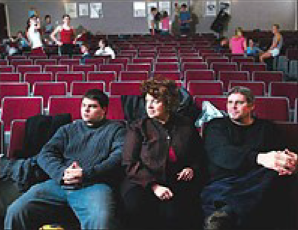 From left, William Conway, Cheri Florance
and director Jim Silcott watch a rehearsal of the production of 42nd Street at Bishop Watterson High School on the North Side. Whitney Conway, who did not speak until he was 6, sings and dances in the musical.

Shortly after Whitney’s birth, specialists said he was deaf, mute and severely retarded.

In her book, Florance describes an unresponsive baby as ‘‘dead weight” and a ‘‘sack of potatoes.” Whitney failed to indicate desires or needs.

As a toddler, he began exhibiting behaviors commonly associated with autism. He was prone to several fits a day, during which he flailed, kicked, scratched and banged his head on the floor.

‘‘When he was banging his head, it turned my stomach,” Pistone recalled. ‘‘I thought he had to be giving himself a concussion. I didn’t know what set it off, and there was nothing I could do to stop it.”

Little Whitney frequently tried to bite people and urinate on them. He unrolled toilet paper and emptied the contents of the refrigerator on the kitchen floor. 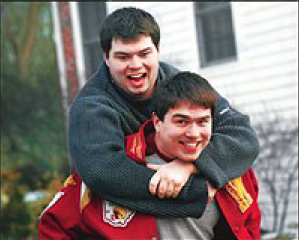 William Conway, top, grapples with his younger brother, Whitney, in the back yard of their Worthington home. William, 19, helped their mother help Whitney, 18, overcome profound problems.

Dr. Florance found him at age 3 pressing a knife against an arm of his older brother, William.

His mother sensed that his anti-social behaviors were attempts to communicate, not malicious acts. She also observed signs of intelligence. Whitney learned to use the toilet without potty training.

He disassembled toys, pens and cameras, expressing a fascination for their inner workings. He also demonstrated an uncanny knack for finding his way to places he had visited only once.

In his silence, his mother concluded, Whitney was a visual learner who appeared to be thinking without words.
‘‘We had to find a curriculum for him.”

Drawing on her professional experience in the diagnosis and treatment of communication disorders, Florance embarked on a strategy that exploited Whitney’s visual strengths to develop his speech and language. 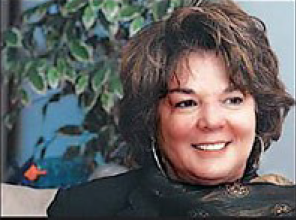 Despite her son’s struggles, Cheri Florance would not give up on Whitney.

She recruited his brother and his sister, Vanessa, as assistants. They mimicked with toys Whitney’s daily routines to build his sequential thinking and demonstrate human interaction. They labeled all the items in their house and taught him words through logos and pictures instead of phonetics and oral repetition.
In their ‘‘therapeutic Disneyland” at home, the family adopted music, theater and dance as teaching tools.

‘‘We used the arts to try to make Whitney better,” Florance recalled. ‘‘The kids liked that more than sitting down with Whitney and trying to make him write the letter A.” Family members changed the way they spoke to Whitney, practicing supportive language that invited him to talk.

Despite her son’s struggles, Cheri Florance would not give up on Whitney.

Whitney spoke his first words at age 6, when he recognized his mother as ‘‘Dr. Florance.” ‘‘I didn’t care what he called me,” Florance said. ‘‘I was just happy he talked.”

Some educators marveled at the sacrifices Florance made on behalf of her son. ‘‘She tailored her life to make Whitney her highest priority,” said Sally Lindsay, director of Clintonville Academy, where Whitney attended seventh and eighth grades.

Florance moved and changed jobs to enroll her son in the best schools and allow her to participate in his classroom instruction.

Some administrators and staff members at Riverside Elementary School thought Florance was foolish for rejecting special-education services for her first-grader.

‘‘Segregating people with disabilities has never proved to work out too well,” she said. ‘‘If we assimilate kids, everyone benefits.” When Whitney was in the second grade at Riverside, school psychologists filed complaints about his meddlesome mother to three practice boards. The boards eventually cleared Florance, and the district apologized.

‘‘I tried to get the schools to understand that the visual thinking system was a powerful brain engine, but that concept was hard to convey and still is,” she said. ‘‘School is a verbal game.”

One of the heroes in her book is Philip Niemie, a former Riverside principal who risked his job to counter recommendations and mainstream Whitney.

‘‘Cheri had a professional reputation that was off-center, and I have always been unconventional myself,” said Niemie, a self-described ‘‘surfer dude from California.” Now the principal at Bailey Elementary School in Dublin, Niemie practiced what he preached: parental involvement.

He acquiesced to many of Florance’s demands because, he said, ‘‘she was the mother.”

Other heroes in the book include classroom teachers eager to work with Whitney despite the extra attention he required. Florance volunteered as room mother.

‘‘I moved into the school,” she said. ‘‘Whitney was so hard to handle, the teachers welcomed any help. The administration did not see where I was going, but the teachers would have welcomed me 40 hours a week.”

At age 7, Whitney began to read and write some. During his four years at Riverside, Niemie said, ‘‘he came in at a stop sign and left with the flow of traffic.”

In the fifth grade at Deer Run Elementary School, he began to show academic achievement. In the sixth grade at Willard-Grizelle Middle School, he successfully rejected an effort to move him to special education by pleading his case before a panel of teachers and administrators. He made the honor roll and played sports at Clintonville Academy, where, Whitney says in his mother’s book, ‘‘I became a human being.”

‘‘His progress has been miraculous to me,” said Lindsay, the academy director. ‘‘I’ve never heard of an autistic child with his struggles come so far.”
Higher Purpose

Florance counted a final breakthrough in her son’s development when he aced his 10th-grade biology test at Bishop Watterson.

‘‘That meant he had a verbal brain that could handle college, graduate school or whatever he wanted to do,” she said. ‘‘That made me feel we were done.”

Through her son, Florance thinks she has discovered a communication disorder syndrome. She has appeared with Whitney at the National Institutes of Health and at the Pasteur Institute in France to discuss her findings, which are the subject of a research project at Ohio State University, where Florance is an adjunct professor of psychiatry.

Whitney’s influence on science matches that of the people he touched. He is especially close to his brother and sister, who attend Manhattan College. Whitney may join them there next year. The siblings shared their mother’s hopefulness and dedication.

‘‘He was my little brother, so I was going to accept him,” William said. ‘‘Growing up, I thought all families were like us. I enjoyed the stuff we did with Whitney. It didn’t seem like work.”

Pistone, Whitney’s caregiver during his preschool years, married and left Columbus when Whitney entered elementary school. She has thought of him often over the years.

‘‘He changed my life,” she said from her home near Dayton. ‘‘He steered me from a career in education to a career in counseling and made me a more understanding and patient parent for my two children.”

Whitney acknowledges the possibility that he was born for a purpose.

‘‘It has crossed my mind that I have made an impact on the world, like a modern-day Helen Keller,” he said. ‘‘The person who should have never been cured got cured.”